In May 2016 I was preparing for a PhD fieldwork visit to Asturias. 2016 had been a hectic year. Taking part in the Ó Riada Gold Medal in Cork, starting my flute album, getting my Spanish up to speed and keeping two children healthy and happy. I was rushing up and down the stairs one morning and I slipped and jarred my shoulder. With family in tow, I rushed off to Avilés, then on to Lorient Interceltic Festival, Whitby Folk Week and back to Sheffield for the start of the school year.

October arrived and the excruciating pain I’d felt all summer began to dim. By this point I had very little movement in my left shoulder, to the extent that couldn’t put my hand in my pocket (no jokes about me being tight with money please). My doctor sent to me a physio and he immediately diagnosed it as frozen shoulder. My choices were either let it heal by itself, which could take a couple of years, or operate. I chose to have an operation. Playing music and looking after my children had become impossible. I had also underestimated the mental strain of the condition.

I was lucky to get a quick referral to a surgeon and an operation within weeks. In November I had my operation.

If you’re squeamish scroll to the music at the end, if not…..

The surgeon carries out Arthroscopic Capsule Release. It’s a lot like a very small kebab shaver you might see when you’re getting your post-beer nutrition. Using a keyhole procedure, Mr Shehani shaved away the layer of scar tissue that was was locking my shoulder joint. I found out later that he’d removed some bone too. Thankfully this was done under a general anaesthetic. I woke an hour or so later in a codeine induced haze with my father-in-law looking at me with an admiring gaze (See photo below). Thank you Bob Dalrymple. The poor man said he saw more of me than he ever would have liked to and needed a stiff drink to recover. 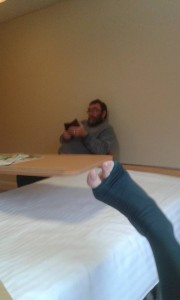 After some ferocious surgical sock waving I grabbed Bob’s attention and we headed home. Pre-op, I was told that depending on what they found during the operation I would have a sling on for a day or six weeks. Thankfully there wasn’t too much long term damage and I had the sling off after one day. The scarring was minimal. I have a large floral tattoo on my left shoulder I had done when I left my ‘proper’ job eight years ago to always remind me to do work that inspires me. The little surgical nicks look like little thorns.  Six weeks of physio followed and I was given the all clear to get on with the slow process of getting back to normal.

It’s the end of January 2017 now and my daily physio is paying dividends. I’ve got much of my movement back and I’m just starting to play for longer periods of time.

There are a number of possible causes for Frozen Shoulder. It can be genetic, that applies to me. It can be related to bad posture, my posture in general is good. A big factor can be stress. The last advice my surgeon gave me was to slow down and relax. He noted that I was always rushing to get somewhere.

So the challenge this year is to slow down. Maybe I was trying too hard in 2016. The time away from playing music and research has given me chance to put things into perspective. I’m going to go slowly with my projects and put some off till 2018. I’m really rethinking how I play, concentrating on relaxation. I’m really looking forward to teaching on the BMus degree for a couple hours per week and starting to think more than do for my PhD. The time out has also reminded me of how precious my time with my son and daughter is. My son will be at school in a year or so. So for now more time with the children and maybe a little less time on the music.

I managed to play a tune for the Whitby Folk Week #Tunesday last month. Not my greatest performance and I was still in a considerable amount of discomfort. I’m putting it here and keeping it on Youtube as marker of my progress.

4 Replies to “Getting Back to Playing: Unfreezing my Shoulder.”