I am delighted to be shortlisted for the Seán Ó Riada Gold Medal Competition in Cork on Friday 5th February 2016. I’ll be competing with 14 other flute and tinwhistle players performing two pieces of Traditional Irish Music each on the night. The emphasis is on the spirit and feel of the music rather than technical excellence alone. 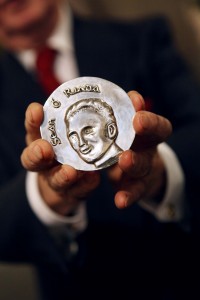 The medal has been designed by Cashel goldsmith Pádraig Ó Mathúna and features an engraving of Sean Ó Riada on one side, and a representation of the poem Dán Aimhirgín (Song of Amergin) on the other. The medal consists of 2 silver plates back to back, and following the competition on Friday Pádraig will engrave the winners name and the year into the medal, and it will then be coated in gold

‘In their search for the gold medalist, the adjudicators will be looking for a musician who has technical proficiency on the instrument, has a musicality in their playing, and a variety in their choice of 5 pieces that illustrate the broad range of rhythms and melody in traditional Gaelic music. They will also be looking for the character found in music from musicians whose life experience and witness grows with age and which invests their music. As Irish music is an art form and requires creative input from the musician, this character is of great importance and should be real rather then faked or imitated from other great musicians. In other words, the adjudicators would rather purchase a recording of, say, Micho Russel, Packie Duignan, Willy Clancey, Denis Murphy, Lad O Beirne, Jamsie Byrne, Seamus Ennis, Joe Cooley, Johnny Leary, Mrs Elizabeth Crotty or Turlough O Caralon or any modern day super harp player say rather then listen to hundreds of imitations. The adjudicators wish the to hear the musician’s own character in their playing – without exaggeration.. This would suggest that whilst technique is important, age and experience is equally so’.

I heartily agree with this sentiment and look forward to celebrating Irish Traditional Music with the other participants in a weekend of music.

You can listen on line from 7pm at:

I’ll let you know how I get on.

As part of the weekend there is a Musicians’ Convention on Saturday 6 February in the Rochestown Park Hotel. The convention is ‘intended to help and advise traditional musicians on a host of subjects. It will run from 2 pm to 5 pm, with speakers from the music industry giving talks on funding opportunities, publicity, insurance, copyright, marketing and publishing, amongst other topics. Speakers will include representatives from IMRO, the Arts Council and Gael Linn, and entry is €5. Musicians interested should register by emailing claru@cuireadhchunceoil.ie’.